Church of Our Lady – Copenhagen Cathedral

Opening hours for sightseeing and tourism

Copenhagen Cathedral is usually open for sightseeing and tourism, but can be momentarily closed due to religious ceremonies (e.g. baptism, wedding or funeral). There is no sightseeing allowed during service.

The church is normally open for sightseeing and tourism:

The Nightchurch in Church of Our Lady is open thursdays, fridays and sundays 19:00-23:00. Read more

When C. F. Hansen designed Church of Our Lady (Danish: Vor Frue Kirke), he created a room of great peace and beauty. The site has housed a church since 1209. The present building was consecrated in 1829, its predecessor having been destroyed in the bombardment of Copenhagen in 1807. Many great personalities of the Golden Age were associated with the church that was decorated by Bertel Torvaldsen. 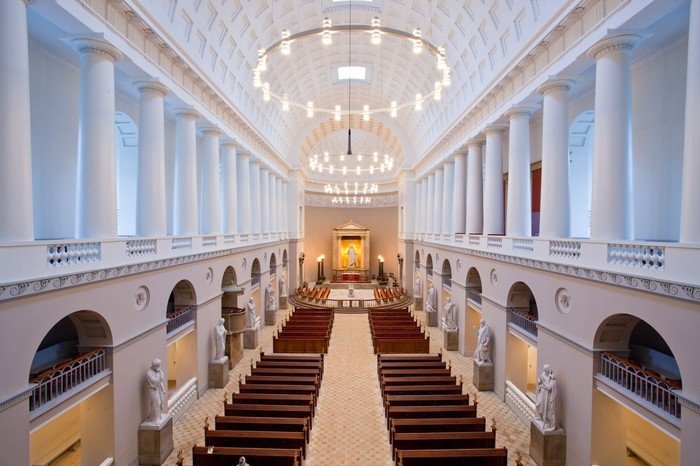 During an ordinary week, many people pass in and out of the entrance to Vor Frue Kirke. Their business varies. Many wish to take part in the services on Sundays and on holidays, on Fridays or in the morning services on every week day. Or they attend night church on Thursdays, Fridays, and Sundays, or they join in special services, wedding or funeral ceremonies. They may come to hear an organ concert or a choir, or they may be preparing for their confirmation in classes held at the church. They may be tourists or worshippers who want a quiet moment in the church room, perhaps to light a candle in the globe or study one of the copies of the Bible left out for general use.

To them all, the church room is significant because it is different from all other rooms in the buildings that surround them in the city. The church draws a different breath, deeper and more voluminuos. Its breath is born of the function of the room, designed as it is to serve as a special place for meetings between man, his deity and eternity. But the breath also comes out of a historical room used by generations before us – a room of traditions that go back far in time. So, in many different senses, we step into a broad context.

From Absalon to the English Bombardment of Copenhagen

When Bishop Absalon organized the building of a royal castle in the fishing village of Havn, and the hamlet was designated to fulfil a central role in the kingdom of Denmark, a small church had already been built there (the remains have been discovered under Strøget, close to Rådhuspladsen, the Town Hall Square). But a larger church was required to match the new prominence of the town. A document written by Absalon in 1185 and sealed in 1187, acknowledges receipt of tithes for the building and decoration of the Church of Holy Mary. But the Church of Our Lady, built in limestone at the highest point in the town, was not ready to be consecrated till 1209. The ceremony was conducted by Peder Sunesøn, Absalon’s successor, and took place, apparently, on Annunciation Day in March, a day that is still celebrated as making the anniversary of the church.

The new church was collegiate and associated with Roskilde Cathedral, in effect almost on a par with it and given a large staff of Dean, cannons (kanniker in Danish, as reflected in the names of near-by streets Store Kannikestræde and Lille Kannikestræde) and vicars. A school was attached to the cathedral which then became a centre of learning. When the University of Copenhagen was founded in 1479, the Dean of the cathedral also served as the Chancellor of the University, the cannons conducted the teaching, and the Cathedral School provided room for the University in the early years.

Before this, the Cathedral had risen in importance in other ways, too. It was associated with the royal family when King Valdemar Atterdag gave away his nine-year old daughter Margrethe - later Queen Margrethe I - in marriage to the Norwegian King Haakon in the church in 1363, and when King Christian I and Queen Dorothea were crowned and married in the church in 1449, it had clearly risen to become the principal church of the realm.

This increase in status, however, did not put an end to the damages inflicted on the church in war and repeated fires. In 1314 a fire had again ravaged the limestone church, this time so violently that it had to be entirely rebuilt, using more modern material: bricks. At the time of the Reformation in Denmark, Vor Frue Kirke and its surroundings became the setting for much unrest. The prelates of the church attempted, for a long time, to keep the church as the principal bastion of Catholicism, and as a result large groups of angry citizens forced their way into the building on the day after Boxing Day 1530 and vandalized much of the furniture. But a year after the introduction of the Lutheran order in 1536, the change was celebrated in two large festive services in the church, presided over by Martin Luther’s associate Johan Bugenhagen. In 1539 Bugenhagen returned to Vor Frue Kirke to consecrate the new Lutheran bishops of the realm. In 1568, a procedure was established in cases of uncertainties concerning the proper conduct of a Lutheran service. Services at Vor Frue Kirke in Copenhagen, from then on, defined accepted practice.

The Great Fire of 1728 affected five of the churches in Copenhagen, including Vor Frue Kirke which had to be rebuilt again. It was consecrated in 1738, but had a short life for a church. During the Napoleonic wars the English attacked Copenhagen. For the first time in history, shells were shot at the civilian population from ships in the entrance to the port. They used the very tall spire on Vor Frue Kirke as their sighting point, and on the night of 5 September 1807, a rocket set fire to the spire which collapsed into the nave of the church and set the entire building on fire. 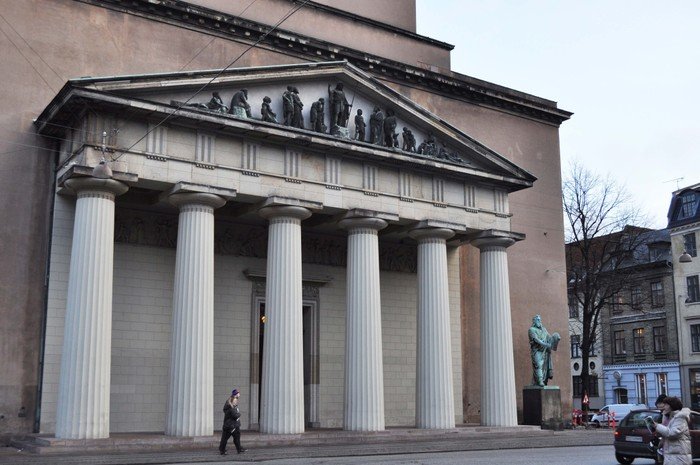 After her defeat in the Napoleonic wars, Denmark was deep in debt, so there was little money for building churches. All the same, discussions of various plans led to a decision to begin reconstruction of the principal church in the country with the principal architect in the country, C. F. Hansen from Holsten, at the helm. This also meant abandoning the idea to reconstruct the church in its traditional style. The church would be built in the "modern" style which C. F. Hansen represented and which he had practised in several remarkable buildings in Copenhagen, Greco-Roman neo-classicism. (Large sections of the old building could, though, be used in outer walls and the tower). Moreover, the sculptor Bertel Thorvaldsen was an obvious choice for the task of decorating the interior; he was even then of considerable international fame. ( More on his work below).

The foundation stone was laid by King Frederik VI in 1817, and on Whitsun Day 1829, the church was ready for its solemn consecration. The new remarkable church has framed a rich church life ever since, during the first decades - coinciding with the Golden Age - with Bishop I.P.Mynster as a highly respected preacher and C.F.Weyse, succeeded by I.P.E.Hartmann as organist, to name but a few. Søren Kierkegaard attended services here, especially Eucharist on Fridays, and in spite of his attacks on the church, his funeral service was held here, as was the case for Thorvaldsen and Hans Christian Andersen. In 1924, the diocese of Zeeland was divided into two, and then Vor Frue Kirke was given the parallel name of Copenhagen Cathedral. Since the 1950s, the Boys’ Choir of Copenhagen has been associated with the church.

Even today, significant days and events, quite naturally, are celebrated in Vor Frue Kirke (e.g. a prominent special national service immediately after the terror attacks of 11 September 2001) along with quite ordinary church functions. The church is first and foremost a church, not a monument. It continues to develop its work in church services, in deaconry and teaching, more and more in cooperation with other churches in the city. One significant new departure was marked by the establishment of Night Church in September 1999.

To the right and left of the main entrance in Nørregade, two large statues appear, of Moses and David by H. W. Bissen and J. A. Jerichau respectively. But if you look up, you see the first example of Bertel Thorvaldsen’s work for the church, "John Preaches in the Desert" above the porch and "Christ’s Entry into Jerusalem" above the doors.

Inside the church, Thorvaldsen’s statue of Christ above the altar captures the attention and sets the tone for the entire church with its welcoming gesture. At closer range, the stigmatas are visible - but discretely executed so that the figure captures both Jesus, man and of the earth, and Christ, crucified, risen and universal.

In the arch above the altar, Thorvaldsen’s relief of "Christ’s Walk to Calvary" with its many details expands on the works at the entrance. In the forefront of the chancel appear the wonderful font, the baptismal angel which was never, like the rest of the marble works in the church, commissioned and paid for. It was Thorvaldsen’s own idea and his personal gift to the church. Notice how fresh and alive the Italian marble of the figure appears - this is the result of many loving caresses from visitors who respond to its attraction.

In the nave, Thorvaldsen’s renditions of the twelve apostles appear with Judas Iskariot replaced by St Paul. Each statue includes the symbol traditionally associated with its subject: St Peter with the keys to Heaven, St Paul with the sword that suggests both the power of his words and the symbol of his martyrdom, St John with his evangelist’s eagle etc. Above the two collection boxes (no longer in use) at the foot of the nave appear two small reliefs by Thorvaldsen, "Compassion" and "The Guardian Angel".

Other Features of the Building

Major renovation organized by Professor Vilhelm Wohlert in 1977-79 removed various additions that had accrued in the interior of the church over the years. A new large central organ was completed in 1995, with a choir organ added in 2002.

The building measures 83 m in length and 33 m in width. The interior of the nave is 60 m long and over 25 m from floor to ceiling. With all galleries open, the church can seat more than 1100 people. The tower is 60 m high and houses the four church bells (Stormklokken weighs 4 tons and is the largest bell in Denmark. The smallest bell in the tower, used at morning service among other occasions, is the oldest bell in the country, dating from 1490 and taken from Antvorskov Klosterkirke).

In the aisles, a bronze bust of Thorvaldsen, modelled by H. W. Bissen, is on display along with many portraits of bishops and deans.